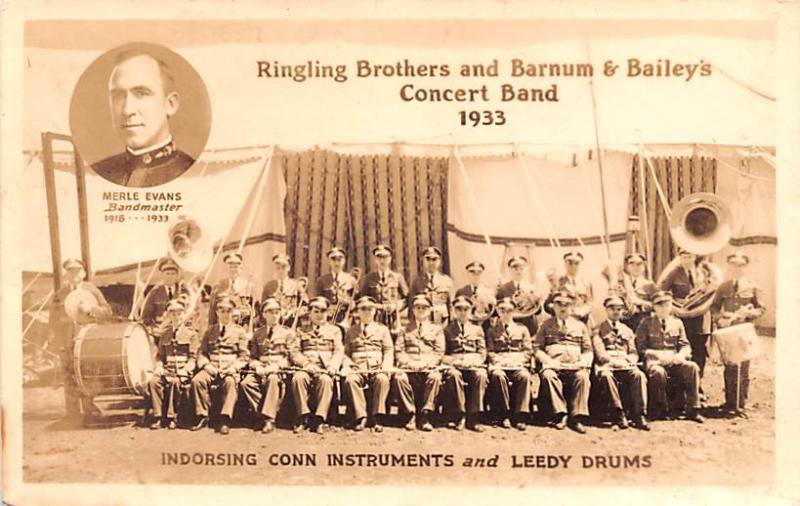 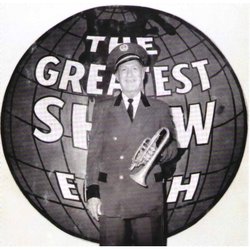 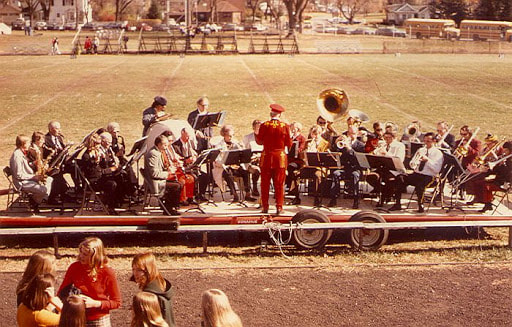 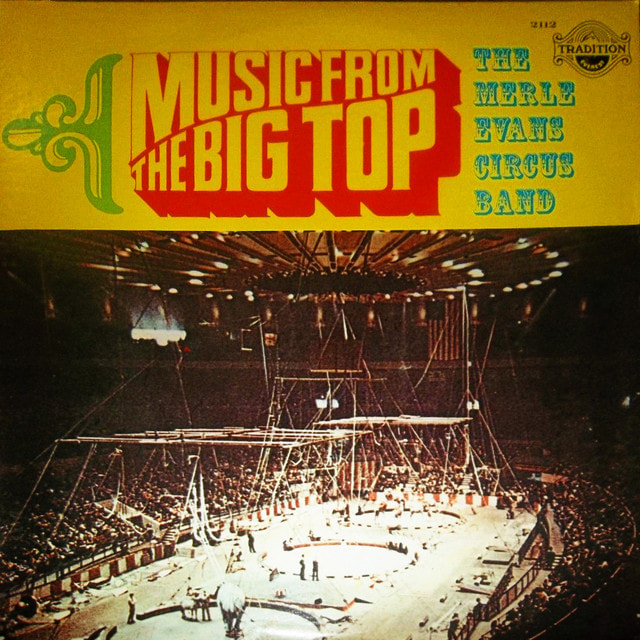 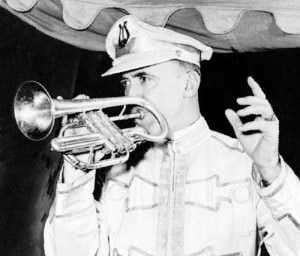 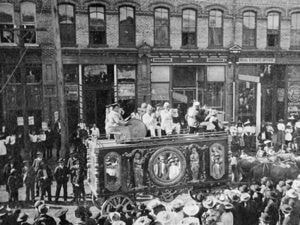 Triumphal March (The Grand Entry)
Siamese Parade (The Jugglers Perform)
Gallito (Three Rings for the Horses)
The Booster (Music Accompanying the Unforgettable Clowns)
Walsenburtg Galop (The Grand Exit with Chariots Galloping Around the Big Top)
The Walking Frog (Used for Performing Seals)
International Vaudeville (The Acrobats on the High Pole)
Dusty Trombone (Music at the Intermission)
The Southerner (The Tent is Made a Fairyland of Clowns)
Thunder and Lightning Polka
Robbins Brothers Triumphal March
Thunder and Lightning (Acrobats with Feats of Strength)
Valse Bleue (The Flying Trapeze Acts)
Embossing the Emblem (Performers on the Trampoline)
Circus music (also known as carnival music) is any sort of music that is played to accompany a circus, and also music written that emulates its general style. Popular music would also often get arranged for the circus band, as well as waltzes, foxtrots and other dances.  (from wikipedia.org/wiki/circus_music)

History
Although circuses have been in existence since the time of the ancient Romans, circus music first started as a performance by a fiddler or a flutist. It was not until the twentieth century that circus music was performed by big bands. The first modern circus director and performer was Philip Astley (1742-1814), a veteran of the Seven Years' War and a skilled equestrian. With his horsemanship skills and the addition of jugglers, acrobats, and clowns, Astley opened Paris' first circus in 1782. The first known composer of circus music was Charles Dibdin (1745-1814). He was partners with Mr. Astley and was also the one who financed the theatre used for the royal circus. Dibdin was a very well known composer in his time and had written hundreds of works before he decided to join Astley to work for the circus. He wrote all of the pieces used in the circus, which were mostly intermezzos or comedy pieces. An ensemble of approximately sixty children was used as singers and dancers to perform the many pieces that he wrote for the circus, such as “The Graces,” “Clump and Cudden,” and “Pandora,” which was arguably the most famous piece that was used in the circus because it was originally used in a popular puppet show that mocked contemporary figures of the time.

Composition and usage.
The most common type of circus music is the circus march, or screamer. It is characterized by a rapid-fire tempo - usually around 200 beats per minute - and melodies that contain showy features such as leaps, runs, and fanfares. It is difficult for "windjammers" (circus musicians) to play because of its fast tempo.

Marches served many purposes throughout the course of a circus. They were often used for grand entrances and exits, overtures and finales, acts featuring wild animals, or other daredevil-type acts.

Circus marches are divided into "strains":
The galop is another popular form of circus music. Like the march, it is played at a fast, lively tempo and is primarily used for daredevil acts, such as trick-riding or other wild animal performances. Any performance or act that consisted of fast-paced tricks or stunts would probably have performed to a galop. The galop is typically written in 2/4 time and has a short length, but would only end when the ringmaster signaled the end of an act. If the act went longer, the galop could be extended by playing da capo. One of the best-known examples is Gustav Peter's widely popular Memory of Circus Renz, which was published in 1894 with the title Souvenir de Cirque Renz. The piece was originally written for the xylophone.

Circus music catered to the needs of the different acts. For example, a high-flying, nimble trapeze act could be characterized by a dizzying galop or a graceful waltz. An act containing ferocious wild animals, such as lions, would probably use a march.

One of the most recognized pieces of circus music is "Entrance of the Gladiators" by Julius Fučík (1872-1916). Fučík wrote almost 300 marches and dances, and for that reason he is often referred to as “Bohemian Sousa.” Although his most well known piece is now famous in circus music, he did not compose with the intent of having his pieces played in a circus.

Another very famous piece of circus music that is very recognizable is "Barnum and Bailey's Favorite" by Karl King (1892-1971). Unlike Fučík, King grew up performing circus music joining Robinson's Famous Circus at the age of 19 as a baritone player. During that time circus music needed its own style because modern music did not fit with most of the acts that the circus performed. This led to his quick rise in popularity as a circus music composer for circuses everywhere.

Also, "Sobre las Olas", or "Over the Waves", is a popular waltz used during trapeze shows. Mistakenly thought to be a waltz by Strauss, it was written by Mexican composer Juventino Rosas. Many other composers were well known for writing screamers, among them Fred Jewell and Henry Fillmore.

One piece, however, that was never normally played was John Philip Sousa's "Stars and Stripes Forever". Instead, it was used in emergencies, such as animals getting loose, to help signify to workers that something was wrong.

Music that imitates or evokes the sound of the circus has also been written, often showing up in film scores, some dedicated to the subject and some not. Jerry Goldsmith famously wrote a theme for the movie Gremlins in such a style, which influenced the film makers to an extent.

Other bands and musicians who employ circus music in their work include Danny Elfman, Tom Waits, Mr. Bungle, the Dickies, Legendary Shack Shakers, and Kaizers Orchestra.

The music genre dark cabaret is heavily based on elements from circus music and from burlesque and vaudeville influences. Popular artists within the genre include The Tiger Lillies and Circus Contraption. Punk cabaret is also influenced by circus music. Artists include The Dresden Dolls, Amanda Palmer, and Emilie Autumn. The dance track "Disco Circus" is named for its resemblance to circus music. Post-hardcore and metalcore bands like The Venetia Fair , Ice Nine Kills, and Crown The Empire add circus music in some of their songs.

Sounds of cornets, trumpets, trombones, French horns, baritones, and tubas were able to reach far and wide, signaling to entire towns that the circus was around. Drums were also added to the circus bands and although saxophones have been arguable, they were frequently used as well.

The calliope, built by Joshua C. Stoddard in 1856, was also used by the circus. Not a part of the circus band, it is a sometimes called a “circus piano” and is played like a piano, but powered by a steam boiler. Its sound can carry as far as nine miles.

Present-day circus music varies widely in instrumentation, style and form. It often incorporates the use of electric instruments and synthesizers alongside the more traditional instruments.

In fact, circuses barely exist today.  Just another piece of American history gone, along with the music and the bands that had musicians capable of playing band music as difficult as circus music was.
The Circus Bee  USMC Band
"The Circus Bee" is a circus march, or screamer, composed by Henry Fillmore in February 1908. It is a technically advanced composition and is used as openers and encores in concerts.

"The Circus Bee" was a celebration of sorts for the fact that Henry Fillmore and his father, who managed their publishing business, finally agreed that the young composer could publish his music "at home" even though it did not meet the elder Fillmore's standard of being religious music. The march is named after an imaginary circus newspaper and reflects Fillmore's lifelong interest in circuses and his varied experiences while touring with five different big top shows.

Misc. comment to above performance:  Wow! What a tight performance! Everyone was in the groove the whole time. I was blown away by the opening, how clear and together those very fast, non-slurred, cut-time eighth notes were across the entire woodwind section. That is so hard to do!!! I've actually never heard it so clear before.