The Path of the


from Antioch to Our Hands

However, recently heard over 'fake Christian radio' was the lie that the KJB1611 came from the Alexandrian Manuscripts, thus falsely proving to those liars and their sheepish 'fake radio-listening non-Bible Believing Christians' involved with today's modern 'fake Christianity,' that of all the modern bible versions (400+ modern versions exist because they just can't seem to ever get it right - but they sure do make a lot of money from the gullible modern Christian in the religious bookstores, run by thieves and robbers), the KJB would be the worst choice and simply not worthy of study etc.

The following information on this page proves otherwise!  Honest manuscript evidence exists, and has always existed, that proves what we have known for 420 years: the King James 1611 Bible is the only true 'Word of God' and contains the 'words of God' in total inspired and preserved completeness - because it comes from the Antiochian manuscript.  It does NOT come from the Alexandrian trash basket - it never has and never will, no matter what the deceived and deceiving pastors, preachers and scholars claim.

You will see here, however, that ALL the 'other' bibles are the ones from the Alexandrian manuscripts - manuscripts which are NOT inspired and preserved by God but are in truth, from Satan himself, and thusly written and changed hundreds of times by man in the name of fake scholarship and manuscripts that are more modern and useless - and FAKE!
The following are the 'charts' that give a summary of manuscript evidence of a King James 1611 Bible.  I made these to fit onto larger paper - so I included them 1) in general 'snipped' (but obviously hare to read the tiny print) view; 2) downloaded the original chart so you may download and/or print them yourself.  I have also included a number of verses to show the warning about following false bibles today.

​This material listed below is irrefutable, although because Isaiah 5:20,21 - Woe unto them that call evil good, and good evil; that put darkness for light, and light for darkness; that put bitter for sweet, and sweet for bitter! Woe unto them that are wise in their own eyes, and prudent in their own sight!   I have now heard that the King James Bible is being falsely taught today on 'Christian' Radio by their statement about the KJB coming from the Alexandrian Text - that is completely not true!

I have uploaded the charts below to show the summary and detail in chart form of the King James 1611 English Bible for my proof that the KJB1611 is the ONLY inspired and preserved Word of Truth / Word of God / Words of God for and to us today, 1611-2020 and beyond.

Note: according to Amos 8:11-13, this King James 1611 Bible won't be available much longer... it is almost already completely impossible to find or hear a preacher preach correctly from it.  See II Timothy 2:15,16.  People today are hearing profane and vain babblings from all the modern bible versions as well as even from their wrongly divided KJB by their evil seducing pastors who are deceived themselves while they deceive their congregations, subtly preparing their congregation for the coming of the Anti-Christ as described in Revelation 6 and 13, not the real risen Christ as told in Revelation 19.

Folks, I believe we are living in the latter times and anytime soon, it will officially be the last days!  In the meantime, we must 'keep' His word, not meaning to obey it to the letter of the law, but to be part of the preservation process for as long as we can.  Psalm 12:6,7 - The words of the LORD are pure words: as silver tried in a furnace of earth, purified seven times. Thou shalt keep them, O LORD, thou shalt preserve them from this generation for ever.  And by the way, the KJ1611 Bible is the only Bible today that has this promise.  Does that tell you anything?
An Illustrated Account of Basic Manuscript Evidence
The Illustrated Account, what I call The Path, is my own design taken from a drawings by Dr. Peter S. Ruckman, who was considered to be an expert historian on KJB Manuscript Evidence.  The material is his, my chart is my own design.
The pic below is the inside page in a tri-fold designed study tract that prints out on 8.5" x 14" paper.
Click here to open this study/tract chart As a Microsoft Publisher document to print your own copies
r if you want to read the smaller print easier. 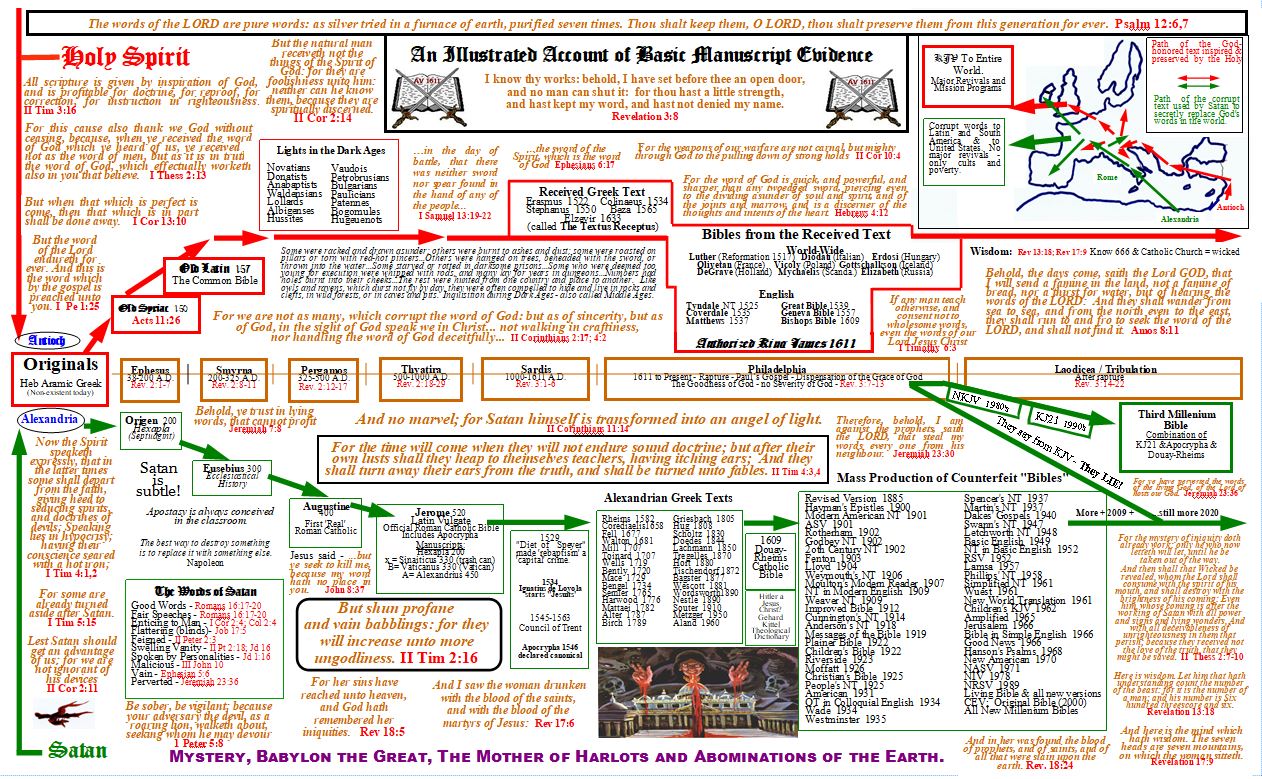 The pic below is the outside page the same tri-fold designed study tract that prints out on 8.5" x 14" paper.
Click here to open this study/tract chart As a Microsoft Publisher document to print your own copies
or even if you just to be able to read the small print. 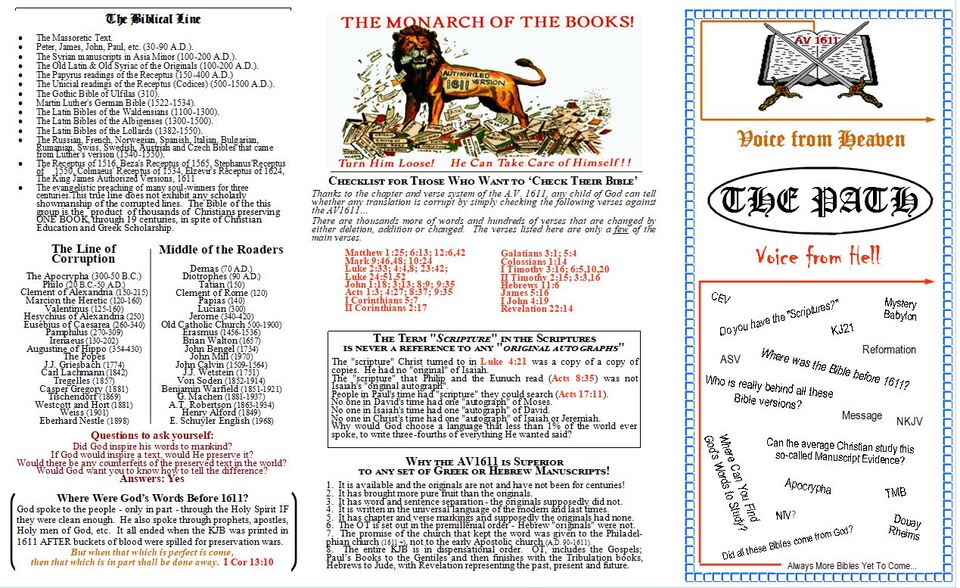 Providential Preservation of the Text of the New Testament King James 1611 Bible
This Preservation Chart is NOT my work, other than to print it and upload it, but I consider it to a most wonderful chart of Manuscript Evidence for the King James 1611 Bible.  I found this chart many years ago and have used it successfully for those same many years!  The small print on the sides of the chart are well worth your read and study time.  Feel free to contact the original writers - if they still exist. 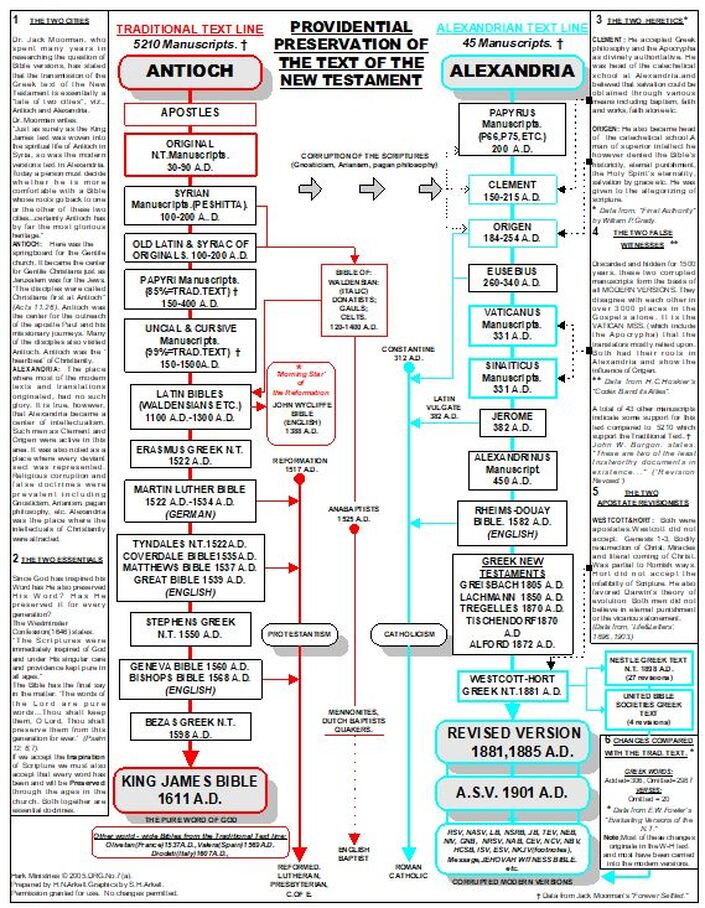 Click here to download your own copy - and to be able to read the small yet important print!
WORD Document                     PDF Format
I have reprinted the "tiny print" from the Providential Preservation chart below so you can read it easier.
The Two Cities - Antioch and Alexandria
Dr. Jack  Moorman, who spent many years in researching the question of Bible versions, has stated that the transmission of the Greek text of the New Testament is essentially a “tale of two cities”, viz., Antioch and Alexandria.

“Just as surely as the King James text was woven into the spiritual life of Antioch in Syria, so was the modern versions text in Alexandria.  Today a person must decide whether he is more comfortable with a Bible whose roots go back to one or the other of these two cities… certainly Antioch has by far the most glorious heritage.”  ​Dr. Moorman

Antioch:  Here was the springboard for the Gentile church.  It became the center for Gentile Christians just as Jerusalem was for the Jews.  ‘The disciples were called Christians first at Antioch” – Acts 11:26. Antioch was the center for the outreach of the apostle Paul and his missionary journeys.  Many of the disciples also visited Antioch.  Antioch was the heartbeat of Christianity.
Alexandria: The place where most of the modern texts and translations originated, had no such glory.  It is true, however, that Alexandria because a center of intellectualism.  Such men as Clement and Origen wee active in this area.  It was also noted as a place where every deviant sect was represented.  Religious corruption and false doctrines were prevalent including Gnosticism, Arianism, pagan philosophy, etc.  Alexandria was the place where the intellectuals of Christianity were attracted.

The Two Essentials - Inspiration and Preservation
Since God has inspired His Word, has He also preserved His Word?  Has He preserved it for every generation?  The Westminster Confession (1646) states: “The Scriptures were immediately inspired of God and under His singular care and providence kept pure in all ages.”
The Bible has the final say in the matter: “The words of the Lord are pure words…l thou shalt keep them, O Lord, Thou shalt preserve them from this generation for ever.”  Psalm 12:6,7.
If we accept the inspiration of Scripture, we must also accept that every word has been and will be preserved through the ages in the church.  Both together are essential doctrines.

The Two Heretics - Clement and Origen*
Clement:  He accepted Greek philosophy and the Apocrypha as divinely authoritative.  He was head of the catechetical school at Alexandria and believe that salvation could be obtained through various means including baptism, faith and works, faith alone, etc.
Origen: He also became head of the catechetical school.  A man of superior intellect, he however denied the Bible’s historicity, eternal punishment, the Holy Spirit’s eternality, salvation by grace, etc.  He was given to the allegorizing of scriptures.   *Data from, “Final Authority” by William P. Grady

The Two False Witnesses - Vaticanus and Sinaiticus**
Discarded and hidden for 1500 years, these two corrupted manuscripts form the basis of all MODERN VERSIONS.  They disagree with each other in over 3000 places in the Gospels alone.  It is the VATICAN MSS (which include the Apocrypha) that the translators mostly relied upon.  Both had their roots in Alexandria and show the influence of Origen.  **Data from H.C. Hoskier’s ‘Codex B and it’s Allies.”

A totally of 43 other manuscripts indicate some support for this text compared to 5210 which support the Traditional Text.  John W. Burgon states “These are two of the least trustworthy documents in existence…”

The Two Apostate Revisionists - Westcott & Hort
Both were apostates.  Westcott did not accept Genesis 1-3; bodily resurrection of Christ; miracles and literal coming of Christ  He was partial to Romish ways.  Hort did not accept the infallibility of Scriptures.  He also favored Darwin’s theory of evolution.  Both men did not believe in eternal punishment or the vicarious atonement.  (Data from “Life& Letters, 1896, 1903)

Click on this link to print off the above 'tiny print' document in   WORD  or in    PDF
(Data for above information from Hark Ministries@2005.DRG.No.7(a).  Permission was granted for Paulson to use!)
This globe illustrates where many of our visitors to this page are located. (it isn't 100% accurate, though)