The Finest Civilian Band in the World 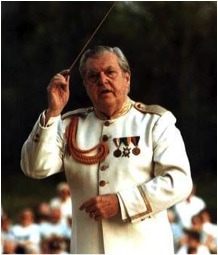 Leonard B. Smith formed the DCB in 1946. For over 40 years this all professional concert band presented concerts for the citizens of Detroit at such venues as Belle Isle, the Michigan State Fairgrounds, Meadowbrook and a host of other popular locations.  These concerts attracted individuals from all over the world and the band gained a worldwide reputation.

The 1969, the band was selected by the BBC to emulate the style of the Sousa Band in a documentary feature, The March King: John Philip Sousa.  In the 1970's, a soundtrack featuring the Detroit Concert Band was recorded for a documentary on the space shuttle at the request of Rockwell International.  In 1982, the DCB became the first concert band to record the entire soundtrack for a major documentary, "The Indomitable Teddy Roosevelt."

The Detroit Concert Band's discography is immense and unparalleled.  In 1974, the DCB released the first in a series of albums containing the complete published marches of John Phillip Sousa.  A second series, Gems of the Concert Band, was introduced in 1979.  The Gem series includes a variety of classic concert band literature including marches, great overtures, virtuoso soloists, band spectaculars and other 'gems' of the vast band repertoire.  Two other albums, 'Soloists of the Detroit Concert Band' and 'Happy Holidays' met with wide acclaim.

According to Sousa biographer Paul E Bierly, "The Detroit Concert Band was regarded by several knowledgeable persons to be the finest civilian band in the world."

The roster of musicians who were members of the Detroit Concert Band over its 40-plus year history includes some of the finest instrumentalists of their time.  It included former and future members of major service bands, major symphony orchestras, and alumni of the Sousa and Goldman bands.  The legacy of the Detroit Concert Band and Leonard B. Smith rests with its thousands of stirring concert performances, its artistry and brilliance as captured on recordings and its unique capability of illustrating and preserving the classic American concert band style.

Anyone remember the band shell local outdoor concerts?
The musical accomplishments of Leonard B. Smith are dizzying diverse and legendary.  In a career spanning seven decades, Dr. Smith has maintained an enviable reputation as a conductor, composer, arranger, cornet and trumpet virtuoso, author, educator and lecturer.

Smith began the study of cornet at an early age in Poughkeepsie, New York, where he was born in 1915.  He won a scholarship to the New York Military Academy and later attended the Emest Williams School of Music.  There, he studied cornet with Williams, composition and arranging with Mayhew Lake and Erik Leidzen, and conducting with Pierre Henrotte.  At the age of 21, Smith joined the Goldman Band as cornet soloist, and during one unprecedented stretch, he performed over 500 solos in 210 concerts!  In 1942, Smith joined the U.S.Navy Band, where he served until the close of WWII.  He performed on hundreds of occasions over the next several decades, retiring as a soloist in 1982.  Regarded as the finest cornet soloist of his generation, and at the peak of his popularity, he was billed as "America's Premier Cornet Soloist."

Also an accomplished trumpet artist, Smith was first trumpet with the Detroit Symphony while performing in the summers with Goldman.  He also appeared with the Philadelphia Orchestra, the Georges Barrere Little Symphony, and the Ford Sunday Evening Hour radio orchestra.  Millions listened over radio, as Leonard Smith was the trumpet player who, for 17 years, played the fanfare from "William Tell" Overture at the start of the "Lone Ranger" live broadcasts.

In 1941, the Mills Music Co. issued his "American Champion" March, the first march of over 450 compositions and arrangements to be published.  He was a consultant for the immensely popular "First Division Band Method" published in the early 1960's and he composed or arranged dozens of instrumental solos that were correlated to the band method.  He authored "The Treasury of Scales" and for a time operated Bandland, a publishing firm that released  several landmark band arrangements.  His output includes 25 marches, several cornet solos, and an American Rhapsody.

In 1946, Smith returned to Detroit and organized his own concert band.  His fame grew to legendary status in the band world during this time.  He received countless honors, awards, citations and "keys to the city" from organizations worldwide.  From 1971 to 1997, he served as music director and conductor of Cleveland's famous "Blossom Festival Band" which consistently broke attendance records at its Independence Day and Labor Day concerts.  In 1990 Dr. Smith relocated the band office to Scottsdale, Arizona, where he continued to compose, arrange and operated his publishing enterprise as well as managed the affairs of the band.