Let no man deceive you by any means: for that day shall not come, except there come a falling away first,
and that man of sin be revealed, the son of perdition;  II Thessalonians 2:3 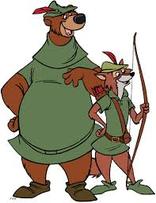 For those who may not know about Robin Hood, here is a short description.

He is a legendary heroic outlaw originally depicted in English folklore and subsequently featured in literature and film. According to legend, he was a highly skilled archer and swordsman. He is said to have robbed from the rich and given to the poor.  (Wiki…)

Ok, now let’s take a quick look at a few key words in that short description and then allow me to offer my comparison and conclusion.  See – I told you this would be short!


Ok, now for my comparison:

While I am not trying to give the label of a Robin Hood to any particular leader today, there are a few people that could easily be labeled in that manner.

It would have to be someone who is considered heroic – great – wonderful – worshiped as their hero and leader, etc. by those who believe as he/she does, that the rich shouldn’t be rich.

It would have to be someone who is highly skilled in their attacks and know just how to slice the pie to make sure his/her followers benefit from his/her thievery.

And, the biggest point is that he/she has to come up with programs designed to take away from the rich.  You know who they are…  the ‘white privilege people’ – the ‘educated’ – those that ‘work hard’ – those that ‘set up the company’ and made it successful – those that have a good ‘family moral tradition’ – those rare churches that would ‘preach the ‘truth’ and be full of ‘true joy’ and ‘peace and understanding,’ with many other attributes of true Christianity as designed by the Risen Christ through Paul in a KJB, etc.

Today, they are envious of your KJB Paul preaching church, they killed those churches; those pastors who preach and teach the rightly divided truth, they ‘killed’ them; the KJB because it traveled the world and has not been changed yet and ‘was’ and ‘still is’ and always ‘will be’ 100% accurate; you, if you believe to follow the Risen Saviour through Paul and KJB Only and don’t play the church / religious game.

They are envious of your understanding, your joy (not necessarily happiness and health and wealth, etc.), your peace in mind and heart, your assurance of that understanding and on and on the list goes.
So apparently the Robin Hoods and his/her followers of today are envious of the educated, the popular, the winners, the working, the ‘rich,’ the talented, the ‘whites’, the owners of successful businesses, a happy family with ‘normal’ kids and husband and wife knowing and trying to do their God-designed roles, etc.

Conclusion:   We continue to see the modern Robin Hoods moving in more andmore to rob from the rich to 'supposedly' give to the poor!  (It gets them votes!!)

Well, that’s enough for now.
I am sure you can add more – and if I pay attention to the word’s news and the school agendas, I will have more to add later.  If you do, please let me know and I will add to this article.

Let’s finish this with a few KJB Scriptures that remind us that this has not only happened before, it has been included in a KJB ONLY that it is going to happen again – and if we pay attention to the world around us as we KEEP our eyes into the KJB, rightly divided, of course, so it all makes sense, we will see that the time clock is running down.

It won’t be long that the falling away will finally have fallen enough for a few of us to be taken away!  Then the rest of the people left in the Sherwood Forest can try to live when the bottom has totally fallen out from them.
How about a few Scripture ‘tag-ons’…

Romans 11:22 - Behold therefore the goodness and severity of God:
on them which fell, severity; but toward thee, goodness, if thou continue in his goodness:
otherwise thou also shalt be cut off.

Romans 16:17,18 - Now I beseech you, brethren, mark them which cause divisions and offences
contrary to the doctrine which ye have learned; and avoid them.
For they that are such serve not our Lord Jesus Christ, but their own belly;
and by good words and fair speeches deceive the hearts of the simple.

II Timothy 4:3,4 - For the time will come when they will not endure sound doctrine;
but after their own lusts shall they heap to themselves teachers, having itching ears;
And they shall turn away their ears from the truth, and shall be turned unto fables.

II Timothy 3:4-9 - Traitors, heady, highminded, lovers of pleasures more than lovers of God;
Having a form of godliness, but denying the power thereof: from such turn away.
For of this sort are they which creep into houses, and lead captive silly women laden with sins,
led away with divers lusts, Ever learning, and never able to come to the knowledge of the truth.
Now as Jannes and Jambres withstood Moses, so do these also resist the truth:
men of corrupt minds, reprobate concerning the faith.
But they shall proceed no further: for their folly shall be manifest unto all men, as theirs also was.

II Timothy 4:14-17 - Alexander the coppersmith did me much evil: the Lord reward him according to his works:
Of whom be thou ware also; for he hath greatly withstood our words.
At my first answer no man stood with me, but all men forsook me:
I pray God that it may not be laid to their charge.
Notwithstanding the Lord stood with me, and strengthened me;
that by me the preaching might be fully known, and that all the Gentiles might hear:
and I was delivered out of the mouth of the lion.

II Timothy 4:18 - And the Lord shall deliver me from every evil work,
and will preserve me unto his heavenly kingdom: to whom be glory for ever and ever. Amen.

Isaiah 3:4-5 - And I will give children to be their princes, and babes shall rule over them.
And the people shall be oppressed, every one by another, and every one by his neighbour:
the child shall behave himself proudly against the ancient, and the base against the honourable.

Isaiah 3:12 - As for my people, children are their oppressors, and women rule over them.
O my people, they which lead thee cause thee to err, and destroy the way of thy paths.

Jeremiah 5:31 - The prophets prophesy falsely, and the priests bear rule by their means;
and my people love to have it so: and what will ye do in the end thereof?

Revelation 6:2 - And I saw, and behold a white horse: and he that sat on him had a bow; and a crown was given unto him: and he went forth conquering, and to conquer.  (note – this is NOT the Second Coming of Christ – He comes in Revelation 19)