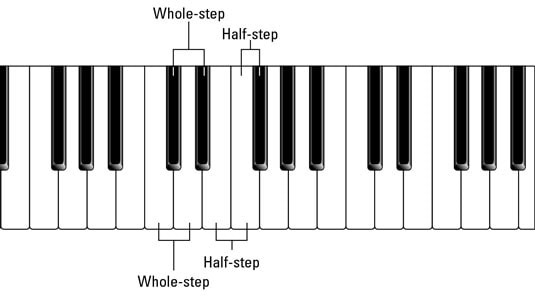 Before we get into more of this 'seducing spirit' and doctrine of the devil' whole-tone music healing, allow me to try to explain, in part II, what whole tones are and what this deceived and deceiving guy is talking about 'musically.'

In music - we have scales.  It sounds like we are walking up the steps, or like some folks say, walking the steps up - and coming back down again, etc.  There are note names for each step of the way.  If we stick to white keys only... (I can't wait for the racist accusing crowd to attack the design of a piano - more white keys than black keys, etc.  I can't imagine trying to play the piano on white keys only - or on black keys only.  however, there is one pastor guy who plays his hymns on black keys only - but he is certainly limited in the number of pieces he cold play...)

...each of these steps are notes that are named - C D E F G A B C.  Note that you see eight letters but just remember there are only 7 because the first note and last note are the same.

I could go deeper (Minor scales, modes, triads, chords, chord progressions, etc.) but let's not... if you understand the whole steps - even if just a little - that is enough.  If you don't, then any more explanation won't help anyway.  It is a fascinating language to understand though - and it is very simple, actually.  I love it!  (that and KJB English!!!).  Learn to play piano and you can learn everything about music.

In the classical world - the western civilization, etc. - we, on this side of the planet (from Europe over to here) are used to hearing various keys that constantly involve both white and black keys - whole steps and half-steps, etc.  We have 13 various scales based on each of those note names - the added one that makes 12 to 13 is called a Chromatic scale and that involves each black and white key.  (student instrumentalists hate that scale... haha... but if they learn that one, they can play just about anything eventually because that scale includes all the notes.)

However, if we were to play everything in whole steps, then we have the Oriental / Eastern sound.  And, of course you have heard me warn about being replenished from the east, right?  ...because they be replenished from3 the east, and are soothsayers like the Philistines, and they please themselves in the children of strangers.  Isaiah 2:6.  It wasn't a good thing when the Jews did it, and it isn't a good thing now that the Gentiles are doing it.  We learn from history that we don't learn from history, right?

So this seven whole-tone thing is nothing but Eastern mystic sound that God hates, according to Amos 5,6 - and he didn't want to hear the sound of their viols then and He certainly doesn't want to hear the sounds of today's modern music, either - mainly the beat from Africa today because it appeals to the flesh nor is He pleased with the mystic sounds from the east today because it plays with the spirit of man, it rejects, quenches and grieves the Spirit of God today.

To God and to us as Christians, music is a tool - it is not the healer, it is not the encourager, it is not the nuances and notations and history of music that is our blessing - it is the words that it supports and/or it is the melodies that are balanced and clean.  (See my sermons on music if you want to see the details of that statement.)

There is a power in music, no doubt.  It can be a manipulator, it can be a mood creator, it can make people respond in various ways - some good and some bad.  It most certainly is the universal language.  All people, all languages, all countries, etc. respond to it whether they understand it or not.

But it isn't how God works - He works through His words - ONLY!  He works through the King James Bible - NOT through music.  God doesn't work through emotions, through the flesh, etc. and that is how music works.  Man can either use music for God or against God.  When one realizes how the devil has done to music, is doing with music today and especially how he WILL be using music in the near future, you will much easier see what is going on with music today not only in the homes and ears of the people, but in the churches, as well.  See Daniel chapter 3 for some prophetic thought.

The 1611 King James Bible tells us that God wants to hear the melody (not the changing the word to 'melody' to the word 'music' like all the modern bibles do).  He is not pleased with the over-emphasis and out of balance of the three music elements - melody, harmony and rhythm.  He is not pleased with the miss-use of the beat, the rock beat, etc.; God is not pleased with the modern dissonant harmonies nor is He necessarily impressed with great harmonic arrangements nor is He impressed with the great performances in churches and CD's from missionary children, etc.   Speaking to yourselves in psalms and hymns and spiritual songs, singing and making melody in your heart to the Lord;    Ephesians 5:19
Now click here to return to the seducing spirit and doctrine of the devil expose'
of this Wholetone / Vibration Frequency baloney in
Part III.