Remember Jesus Christ Superstar?  How about Godspell?  Well, how about another new musical that is equally awful and untrue yet much more subtle and acceptable to the general church crowds today?

So naturally, any talk of any 'Jesus' in the public sector has to be blessed by the devil himself.  Can you imagine the uproar this would cause if a school music department would present this as their musical for the year?  Well, maybe we are so far gone that even the public sector would start accepting 'Jesus' again back into the classrooms... But, as we compare this musical to the King James Bible, we will see the true light of the scriptures as it points out the false teaching, thus the false christ being presented.  He is being presented in the churches today - so why not get it back into the school classroom?  Well, it certainly can't be the truth being presented.

Schools have for years in the past and continue to do so, have sung 'sacred' music in their choir programs.  And for the most part, they have always been incorrect in their presentation of the truth concerning God, the Holy Spirit, Jesus Christ - pre-gospel and/or as risen, etc.  So under that guise, why not try to do the musical "Jesus! - the Advent of the Messiah"! in your school!  Makes sense, right?

They have already taken the living God out of the schools and have replaced Him with humanism - a legally established religion.  But now that they see the moral decay, they think they are letting God back into the schools with all this 'religious' music.  I am sure the local pastors would be thrilled to hear that Jesus is being sung about again in their local schools.

But the King James Bible properly divided will certainly expose the dangers of this religious musical!

While this is not a complete comparison, it is close enough to show the truth about the agenda of this musical will put forth to those folks who will not endure sound doctrine that Paul talks about.  This music, through the teachings as well as the music, will scratch those itching ears - and will just continue to turn their ears from the truth as they so happily be turned unto fables!
The following are some key words I saw in this new 'musical'
​"Jesus!  The Advent of the Messiah."
Note:  Yes, some of these words do exist in a King James Bible.  However, when you see the context in the songs compared to the context, etc. of the KJB, you will see a different and incorrect usage of that word.

Also, note this whole thing is based on the Old Testament.  Even the title suggests that thought - Messiah.
It is a good idea that if you haven't read about Satan's goals and objectives, etc.
you will find the best information in Isaiah 14:12-17 and Ezekiel 28:13-19. 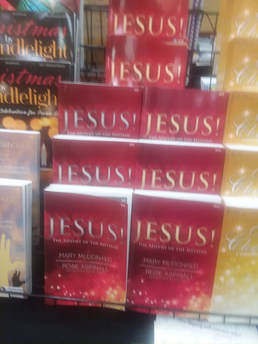 Amazing to find a 'musical' display like this one in a public school music workshop, isn't it!
Well, as you just read, it is not really amazing at all - it should be expected these days!
This is NOT about the real coming of the real Christ!